As part of the major events celebrating the 50th anniversary of the establishment of China-Italy diplomatic ties, the 2020 China-Italy Year of Culture and Tourism will open with a concert at the Auditorium Parco della Musica in Rome on Jan 21, said Chinese and Italian officials in Beijing on Wednesday.

The year-long event will feature nearly 100 cultural and tourism activities in both countries, ranging from performing arts and visual arts to cultural heritage, tourism and creative design.

The grand opening will consist of a star-studded concert bringing together famous Chinese and Italian artists, a China-Italy tourism forum that will convene industry leaders from both China and Italy, and a photo exhibition showcasing world heritages from both countries.

"China and Italy are two representative ancient civilizations in the East and West. We both have 55 UNESCO world heritage sites, tied for first place in the world," Zheng Hao, deputy head of the Bureau of International Exchange and Cooperation of China's Ministry of Culture and Tourism, said at the press conference on Wednesday.

"Looking back on the past years, all the important cultural cooperation achievements were groundbreaking, such as the long-term exhibitions set up in each other's national museums, the establishment of the China-Italy Cultural Cooperation Mechanism, and the pairing of World Heritage sites from the two sides," he noted. 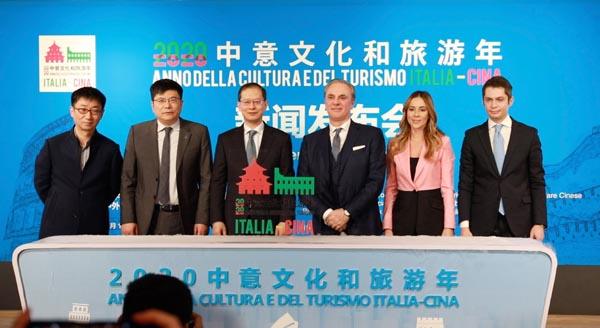 The two nations are promoting the twinning of UNESCO world heritage sites to promote cultural tourism. The West Lake Cultural Landscape in East China's Hangzhou, for example, has established a friendship relation with Italy's City of Verona. The two heritage sites are exploring exchanges and cooperation through co-producing films and exhibition curations.

Chinese artworks will not only be displayed at the 17th International Architecture Exhibition in Venice in the upcoming months, but also in famous Italian museums such as the National Archaeological Museum of Naples, according to Zheng.

In the cultural heritage sector, big Chinese museums such as the Palace Museum and the National Museum are working on swap exhibitions with their Italian counterparts.

Talking about Italian art that will be shown in China, Italian ambassador Luca Ferrari told China Daily, "We have some very important Italian museums like Uffizi. It will bring large exhibitions to China."

Italy has become a popular tourism destination among Chinese tourists in recent years. Statistics show Italy received over 3 million Chinese visitors last year and that number is expected to rise to 4 million in 2020. The ambassador noted Italy appeals to Chinese people in three main areas: art and culture, local people's hospitality and its culinary delights.

"But nowadays, there is also an enormous number of Italian tourists who come to China for its countryside, for its beautiful landscape and cultural heritage," he said.

During the press conference, the event's logo was also unveiled.